Micro CHP systems are certified under the Microgeneration Certification Scheme as an MCS approved technology. This means as an MCS Certified installer, Solid Renewables is able to install MCS Certified CHP Equipment and offer consumers the Feed in Tariffs.

Micro CHP stands for micro combined heat and power. This refers to a heating technology which generates heat and electricity simultaneously, from the same energy source, in individual homes or buildings. 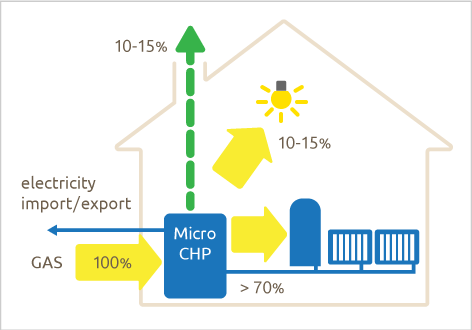 A typical domestic system is expected to have the potential to generate up to 1kW of electricity per hour once warmed up. This would be enough to power the lighting and appliances in a typical home. The amount of electricity generated ultimately depends on how long the system is running.

Most domestic micro-CHP systems today use mains gas or LPG as a heating fuel, although they can also be powered by oil or bio fuels. While gas and oil are not renewable energy sources (they are fossil fuels), the technology is still considered to be a ‘low carbon technology’ because it is more efficient than just burning the fossil fuel for heat and getting electricity from the national grid.

Micro-CHP systems are comparable in size and shape to an ordinary, modern, domestic boiler and can be wall hung like most boilers, or floor standing. Servicing costs and maintenance are estimated to be similar to a standard boiler – although a specialist will be required.

The only difference to a standard boiler is that they are able to generate electricity while they are heating water.

Micro-CHP has a number of benefits, including:

There is very little complexity to installing a micro-CHP unit. If you already have a conventional boiler then a micro-CHP unit should be able to replace it as it’s roughly the same size. Given the electricity generated, an electrician will also be involved with the installation but this is something the installer will organise. The estimated costs are often quickly covered by the Feed in Tariffs.